Museum of Lost Interactions: The Social Communicator in 1932 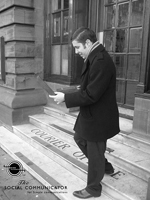 While reading the posts over at Design Observer recently, I scrolled through the images of the day and clicked on The Social Communicator image. The link takes you to The Museum of Lost Interactions (MoLi).

The Museum of Lost Interactions opened in 2006, and many of you may know about it already because of the initial sensation it caused among prominent thinkers about technology like Bruce Sterling. However, for those who don’t, I thought you might want to. MoLi is located in the University of Dundee’s Interactive Media Design program. MoLi aims to raise public awareness of the history of interaction design.

MoLi’s most recent exhibit, Forgotten Chairs, provides the following description of what the museum offers to those interested in interaction design.

Many people assume that the discipline we now call interaction design began with the emergence of the personal computer, but sensitive professionals have been conceiving and crafting our interactions with objects for centuries.

The original Museum of Lost Interactions exhibition was created by a group of Interactive Media Design students who will graduate in 2008.

The Social Communicator is one of nine exhibits at MoLi that focus on electronic devices involving interaction design. MoLi advances an approach it characterizes as Interaction Archaeology:

Our aim as Interaction Archaeologists is to rediscover historical interactive artefacts and to restore them to working order. To bring a once-dead object back to life we use whatever means we can to respectfully re-create its interactivity.

The Social Communicator is a technology designed in 1932 to provide wireless signalling using morse code produced from a mobile box. The exhibit characterizes the device as follows:

The exhibit is accompanied by a video demonstrating the device’s use. Treat yourself and take a look.

This entry was posted on Monday, February 2nd, 2009 at 4:04 pm and is filed under Cool Entries, Experience Design, Social Media. You can follow any responses to this entry through the RSS 2.0 feed. You can leave a response, or trackback from your own site.